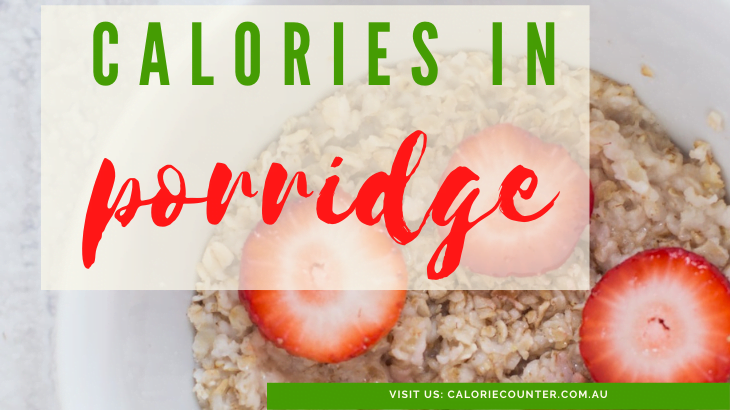 Everyone says it is good for you, but how about the calories in porridge? Porridge has been our food since cavemen, and it is not going away anytime soon, but is it really a good option? Let’s take a closer look at porridge nutrition to see how many calories there are in your morning bowlful. Skip straight to the porridges to see quick calorie counts or read all about porridge first.

What is Porridge, exactly?

Boil starchy plants in water or milk so that some or all the starch breaks off into the liquid to thicken the mixture and thus make porridge. This post sticks with porridge made from oats specifically, because that’s the type we usually mean when we say “porridge”. You can use the calcount Food Search Box to find nutrition information for other types of porridge, like Congee for example.

Someone in the Middle East ate the first bowl of oatmeal porridge more than 10,000 years ago. Oats are a grass grain, like wheat, but smaller. Cultivated oats probably began as a “weed” crop in fields of wheat when humans first began farming. Thus, the humble oat is one of the first grains to be cultivated. Even before farming began, we can imagine our ancient hunter-gatherer ancestors boiling up a steaming concoction of wild oat seeds which we would recognise even today as breakfast.

The Oats in Porridge

Compared to wheat, oat grains have several disadvantages. They’re smaller, less starchy, more difficult to harvest, take longer to cook, and they go bad (rancid) more easily. Perhaps that is why oats were historically used as horse fodder rather than human food in much of Europe. Scotland has always been the exception because oats grow better than wheat in the poorer soils of the Scottish Highlands. It is from Scotland that our modern concept of Porridge comes.

Manufacturers crush the oat grains (groats) under rollers, then steam them until partly cooked. This process extends their shelf-life and makes them much easier and quicker to cook. Unrolled oats (either steel-cut or whole groats), are a lot harder to cook. They’re also much rougher in texture than rolled oats. The pre-cooking process makes the porridge taste a bit nutty.

The nutrition value of a bowl of porridge depends mainly on what other ingredients have been added to the oats. Typically, porridge is just 15% oats by volume, so the other ingredients have a huge impact on the porridge’s nutrition. When made with water alone, porridge is 12% carbohydrate, 2% dietary fibre, 1.5% fat, and 0.3% sugar. Besides manganese (0.6mg), there are no significant quantities of vitamins and minerals in plain porridge. The biggest “special” benefit of oats porridge is that it contains beta-glucan. This is a type of plant fibre which may lower cholesterol. Oats’ relatively poor nutrition profile encourages some porridge manufacturers to fortify their product with vitamins and minerals, so always read the label before purchase and choose wisely.

How to Make Porridge

The simplest method to make porridge is first to empty a sachet of “instant” oats into a bowl. Next, add milk or water. Then, microwave on high for 90 seconds, stirring halfway through. The artisan way is to formulate your own unique recipe where you soak organic single-source groats in buttermilk for two days before blending in exotic spices and spring water and simmering over low heat for a couple of hours (carefully stirring and chanting Gaelic aphorisms throughout). Both methods result in a starchy, lumpy, slightly sticky porridge to which you can add sweeteners, flavours, fruit, and nuts.

The porridges featured in this post are the basic type, made with common rolled oats.

Does Porridge make you Gain Weight?

Porridge is not a low-calorie food, especially when ingredients like nuts, dried fruit, cream, butter, sugar, and coconut are added. As you can see from the list below, the non-oat ingredients in porridge quickly ratchet up the calorie count. No doubt, a “fully loaded” bowl of porridge is certainly fattening. However, oats alone are an excellent choice for breakfast, because their high-fibre content and sustained-release carbohydrates make you feel fuller for longer. Eat a warm bowl of porridge, wash it down with a mug of tea or coffee, it will sit in your belly like a concrete block for a couple of hours, during which time you will not be tempted to snack.

Calories in Porridge made with Water

Calories in Porridge made with Regular Milk

Unsweetened porridge made with regular milk has 128 calories in each 100 grams. This means that a 130g bowl of unsweetened milky porridge has 167 calories in it. Make this porridge with just two ingredients: rolled oats and regular (3.5% fat) milk in the ratio of 1:3. It is more appetising than the watery variant, but this unsweetened, unsalted milky porridge is probably still far too bland for most people’s taste.

Calories in Porridge made with Skimmed Milk

There are 95 calories in 100 grams of porridge made with skim milk, so a 130g bowl contains 124 calories. Porridge made with skimmed milk is less of a lumpy slurry than water-only porridge, despite the lack of fat, on account of the binding properties of protein. The good thing about skimmed milk is that it contains far fewer calories than regular milk, albeit at the expense of taste. If you have not already done so, check out our post on the differences between skimmed, lite, and regular milk.

Calories in Porridge made with Reduced Fat Milk

A 130g bowl of porridge made with reduced fat milk has 140 calories in it. There are 108 calories per 100 grams in this lighter than regular milk/heavier than skimmed milk porridge option. Again, this is an “entry-level” plain and bland porridge which will flatten the bushiest of tails in the morning.

Calories in Porridge made with Soy Milk

Soy milk can have a slight beany flavour which might enhance the slight nuttiness of rolled oats. Porridge made with regular soy milk and nothing else has 112 calories per 100 grams, or 146 calories per 130g serving. Combine 1 part rolled oats to 3 parts soy milk to make an insipid soy-flavoured porridge which will not win any gastronomic awards.

Calories in Porridge made with Milk and Water

There are 96 calories in 100 grams of porridge, prepared with regular milk and water. The milk and water are combined in equal parts. A 130g bowl of this porridge contains 125 calories, which is about the same as porridge made with skim milk. If you cannot decide if it is better to make porridge with water or milk, this could be the porridge for you.

Calories in Porridge made with Honey or Sugar

Most people make their porridge with milk and sweeten it with sugar or honey, so this is probably the porridge which applies to you. A 130g serving of sweetened porridge contains 172 calories, because there are 132 calories in each 100 grams. The calorie difference between sweetened and unsweetened porridge made with regular milk is just 4 calories per 100g. The taste difference is immeasurable, because porridge is bland, and sugar/honey tastes good. So go ahead, add a squirt of honey or syrup or a level spoon of sugar to your bowl!