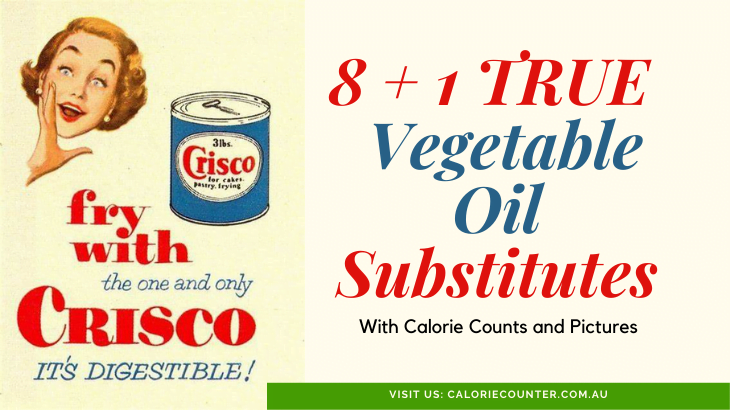 If you are looking for an illustrated list of REAL substitutes for vegetable oil, you’re in luck! This is not just a list of vegetable oils not named Vegetable Oil. Get that blend of who-knows-what out of your kitchen by swapping it for one or more of these readily available TRUE alternatives.

What is Vegetable Oil?

The story of how vegetable oil as we know it came to dominate our tables is a fascinating history. It involves nineteenth century candlemakers, soap manufacturers, waste cottonseeds, corrupt politicians, and lard wars. We’re not delving into it here but suffice to say that modern processed vegetable oil has a short, colourful, and controversial origin.

Origins aside, vegetable oil can be fairly described as mass-produced, highly processed plant oil which is typically extracted from the seeds of monocultured factory farm crops. The process of manufacturing vegetable oil is complex and involves the use of industrial solvents, additives like butylated hydroxyanisole, high temperatures and pressures, multiple chemical reactions, deodorisation, and distillation. There is growing evidence to suggest that such vegetable oil might be harmful to health.

What’s in a Name?

Cast your eye along the supermarket cooking oils aisle to see names like “Sunflower”, “Canola”, “Rice Bran”, “Olive”, and “Vegetable”. These oils, and many more like them are all vegetable oils. The reason that some of them are labelled “vegetable oil” is because they are blended from different types of plant oil (an example blend would be canola with palm and castor). One reason to blend different types of oil is to make them more shelf stable and affordable. This may indicate that the generic “vegetable oil” blends are made with cheaper, less chemically stable types of plant oils.

If you’ve decided to give up highly processed modern vegetable oil, please understand that it will not be as easy as swapping one bottle for another. You will be foregoing a marvel of science and mass manufacture which has been physically tweaked and chemically twisted to meet your exact use requirements. Neutrally flavoured, almost scentless, liquid even when cool, and possessing a high smoke point, modern vegetable oil is super-convenient. You can just as easily use it to bake a cake, fry an egg, make a delicate chilled cucumber salad dressing, or baste a rotating, roasting hog above a blazing firepit. None of the vegetable oil substitutes on this list are as versatile, readily available, or cheap.

Nevertheless, if you are keen to ditch your bottle of Digestible! Hexane-purified! Hydrogenated! vegetable oil, please read on:

When you cook bacon, you cook with lard because lard is simply rendered pork fat. Well-made lard is almost tasteless and scentless. Semi-solid at room temperature, lard will not work as a vegetable oil substitute in salad dressings or party dips. However, you can shallow or deep fry just about anything in it. Also, it is arguably the tastiest option for pie crusts and pastries. Lard contains 884 calories per 100 grams.

To make tallow, simply render beef or mutton fat. Also known as “dripping”, as in Beef or Mutton Dripping (884 calories/100g). It is more solid than lard at room temperature, but it quickly melts to make a flavourful oil suitable for most fry-ups. Tallow is a nutritious alternative to vegetable oil, because it contains good amounts of choline, Vitamins D and E, and selenium.

Suet is the King of Fats. Sourced especially from around the kidneys of cattle and sheep, suet is a special type of hard, pure, raw, solid fat. Most famously used to make pastry, suet can also substitute vegetable oil for deep-frying chicken, chips, and anything else that does not require bland taste. It melts in the pan when the temperature reaches 45-50 degrees centigrade, giving off a distinctively rich smell. Each 100 grams of suet contains 811 calories.

Butter is mainly a combination of fat (80%), water, and some protein extracted from dairy milk and cream. With 723 calories per 100 grams, butter is less calorific than pure oil. Whilst butter can be a substitute for vegetable oil in some use cases, it has some key disadvantages. The water in butter interacts with the fat so that the butter smokes and burns at relatively low temperatures. This makes butter unsuitable for deep frying and searing. Additionally, some butters made with cultured cream impart distinctive flavours to the food cooked in them. Being solid at room temperature, butter is not a good choice for dressings and dips.

Ghee (clarified butter) is what remains of butter after the water has been removed. Unsurprisingly, ghee has a calorie count of 884 calories per 100g, making it just as calorific as other oils. To make your own ghee, simply simmer butter over low heat until it stops bubbling (the bubbles are escaping steam). Ghee is much more suitable for frying than butter, so it makes a viable substitute for vegetable oil. Lactose intolerant people can eat clarified butter safely, since ghee is lactose-free. Like lard and tallow, ghee has a high smoke point.

Sour cream is one of the best substitutes for vegetable oil for making tasty dressings, dips, and some sauces. With “just” 337 calories per 100g, it has less than half the food energy of vegetable oil, and much more flavour.

Schmaltz is the poultry version of lard and tallow. Like lard and tallow, there are 884 calories per 100g in schmaltz. Don’t worry if you cannot find schmaltz in the shops, it is easy to make at home. Simply heat chicken, goose, or duck fat over low heat for about 5 hours to render the schmaltz. Schmaltz is traditionally used in Jewish cooking, where it serves the purpose of lard. Schmaltz has a distinct rich flavour and a high smoke point, making it ideal for deep frying.

Perhaps surprisingly, mashed, or pureed fruit may be used as a substitute for vegetable oil when baking (margarine is vegetable oil). Whilst there is hardly any fat in fruit, the texture, moisture retention, and binding properties of blended fruit serve the same purposes of oil in baking. Pureed apple or applesauce works particularly well as a one to one substitute for vegetable oil when baking muffins and cookies. The calorie count will vary depending on the fruit used, but expect apple to be in the 56 calories/100g range.

You cannot truly substitute vegetable oil for vegetable oil, but it is worth noting the difference between cold-pressed and industrially manufactured vegetable oil. Basic equipment and simple methods make cold-pressed vegetable oils, unlike the rigorously manipulated vegetable oils found in the mass-market. Simple squeezing and filtering of oil-rich plant matter like olives, palm fruit, macadamia nuts, and coconuts release the oil. Nothing is added to the oil and it is not artificially hydrogenated, deodorised, purified, blended, or preserved. Such oils have about 880 calories per 100g and will not keep as long, or taste as neutral, or cook as consistently as mass-market vegetable oil.

Now, read about how much industrially produced palm oil there is in Nutella in our post on Nutella Ingredients Demystified!