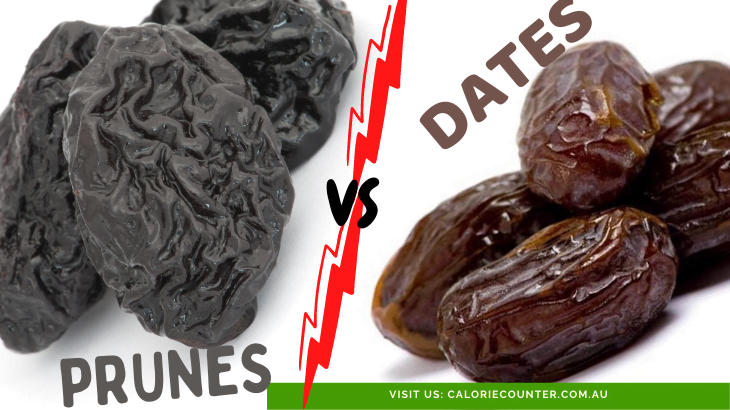 Dates VS Prunes: both popular dried fruit, sweet, and they sort of look the same, but which has more calories? Are they even nutritionally similar? Let’s look at these sweet nuggets in comparison, so that we can find out what is better for you, prunes, or dates?

Contents Show
1 Differences between Prunes and Dates
1.1 Prunes are Plums
1.2 Dates are Dates
2 Are Dates as good as Prunes for Constipation?
2.1 How many Prunes or Dates to eat per day?
2.2 Iron in Dates and Prunes
2.3 Dates versus Prunes Fibre
2.4 Dates VS Prunes for Weight Loss
2.5 Infographic
3 Prunes VS Dates Nutrition
3.1 Finally, What’s better, Dates or Prunes?

Differences between Prunes and Dates

In many ways, dates and prunes are interchangeable. They are about the same size, colour, and shape. They’re both sticky and sweet. You can safely substitute one for the other in just about any recipe. Leaving taste preferences aside, which one wins the food choices battle?

Prunes are plums, dried. This comes as a surprise to kids who cannot conceptually equate Nanna’s small wrinkled “medicine” to the juicy purple plum in their lunchbox. The most common prune is the dried Agen plum, today mostly grown in California, USA. It is a so-called “loose stone” plum, which means that the seed easily detaches from the flesh.

Dates are dried dates, except for when they are fresh dates. Unlike prunes, dates do not change names and they are not usually known as “dried dates”. Perhaps this lack of distinction is because fresh dates are rarely found in the supermarket.

Are Dates as good as Prunes for Constipation?

Modern studies have backed up the old folk-belief that prunes are an effective home remedy for constipation. In fact, studies like this one show that prunes outperform other high fibre foods like psyllium to keep constipation-sufferers regular. Whilst both dates and prunes have similar amounts of plant fibre, prunes have about ten times the amount of sorbitol found in dates. Sorbitol causes water to enter the colon (large intestine), thus hydrating drier waste and aiding its passage. Dates do help with constipation, but they are not as useful as prunes.

How many Prunes or Dates to eat per day?

It is not a good idea to eat significant quantities of the same fruit, especially dried fruit, every day. Prunes and dates are high-calorie foods which contain relatively large quantities of specific vitamins and minerals which may have undesirable effects when eaten in large quantities. As you may have read in our post on carrots, sometimes usually beneficial vitamins can have a toxic effect if eaten to excess. Instead of eating them daily, have a handful of prunes or dates (about 100g) once or twice per week as part of a balanced diet.

Iron in Dates and Prunes

20% of women and 3% of men are reportedly deficient in iron, so iron is a rightly sought-after food nutrient. Surprisingly, dates and prunes seem to have built up a recent reputation for being iron-rich.  The disappointing fact is that both dates and prunes are comparative lightweights when it comes to iron content. Neither fruit, even in dried form, contains more than one milligram of iron per 100g. This compares poorly to other dried fruit like apricots and tomatoes which can contain ten times as much iron. Even fresh high-iron foods like beans, spinach, read meat, and shellfish, contain 3 to 8 times the amount of iron as prunes and dried dates.

Prunes and dates are both high-fibre foods with about 10% of their edible portion being composed of dietary fibre. On a head-to-head basis, dates contain about 20% more dietary fibre than prunes (10g versus 8g per 100g). Whilst this seems like a significant difference, on a practical level it is basically meaningless because of the main reason for the difference: dehydration. As fruit dries, the non-water parts become more concentrated, by weight. Therefore, a relatively drier prune is likely to have more fibre (weight for weight) than a relatively less dry date, even though prunes have a lower nominal fibre content than dates. How “dry” is the prune/date that you eat on a specific date? From a practical perspective, it is effective to think of both dates and prunes as being equally fibre rich.

Dates VS Prunes for Weight Loss

Which is better for weight loss, dates, or prunes? Dates contain significantly more calories than prunes, but before you reach a quick conclusion stop to consider your other options. Dried fruit like prunes and dates are deceptively high in calories because they pack their nutrition into tightly wrapped packages. A prune has the same nutrition of the plum it was made from because it is the plum it was made from! Think about it: would the average person choose to eat ten fresh plums as an afternoon snack whilst trying to lose weight? Probably not. But that same person might not think twice before downing ten prunes with their 3.30 cuppa. Both dates and prunes are low-volume, high-calorie food options so neither is good for weight loss.

On a weight-for-weight basis, dates contain about 45% more calories than prunes (289 calories compared to 200 calories per 100g). With 66 grams per 100g, dates have more than twice as much sugar as prunes, which have 31 grams of sugar per 100 grams of fruit. Dates (14mg/100g) also have twice the sodium of prunes(7mg/100g). Prunes and dates both have 2 grams of protein per 100g. As noted a few paragraphs above, dates have more dietary fibre than prunes, (10g compared to 8g) per 100g. When it comes to micronutrients, dates have the edge over prunes in pretty much everything except Vitamin K and Vitamin A. Dates excel over prunes in two micronutrients: folate (folic acid) and selenium.

Prunes are better than dates, in our opinion. Prunes have significantly fewer calories than dates. The calories in dates primarily come from fast-burn sugars which can influence the body negatively. Unless a person has a distinct need to supplement their folate levels (e.g. pregnancy), prunes provide similar micronutrients to dates. Prunes contain useful substances like sorbitol and phenols which, together with dietary fibre, help to combat constipation.

That said, both dates and prunes are healthy, nutritious, naturally sweet treats which should be enjoyed in moderation.