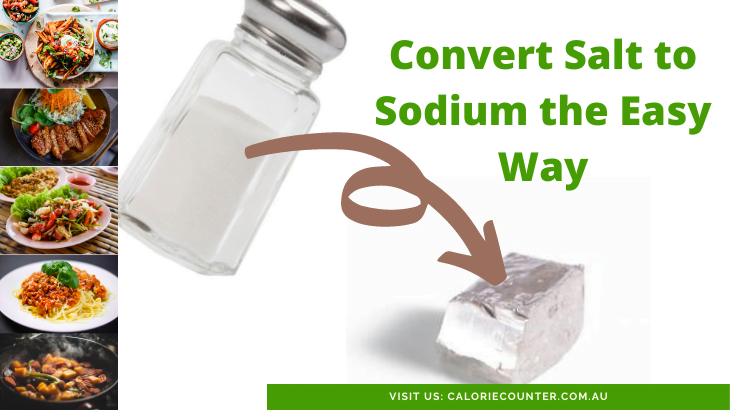 When you are being careful about what you eat, it is important to know how to convert sodium to salt and vice-versa. That way, you will be able to keep a tally of roughly how much sodium you are eating daily. In this post we have made a handy salt to sodium converter for you (see below) and outline some interesting information regarding sodium and salt.

Too much Sodium is Bad for you

Sodium is an essential mineral, needed for at least ten crucial processes in the human body. Perhaps the most important of these functions are related to the maintenance of correct blood pressure, controlling the nervous system, and enabling muscles to work. Simply put, you could not survive without sodium.

That said, read a standard nutrition label, and you will see a value for sodium in milligrams. Why do labels make a point of detailing sodium rather than all the other essential metals found in food like phosphorous, magnesium, and potassium? Well, as you may have heard, excess sodium has been linked to high blood pressure, cardiovascular disease, kidney disease, and fluid retention.

In fact, the National Health and Medical Research Council recommends an upper limit of 2,300 milligrams per day for the average adult. Therefore, it is important to have an idea of how much sodium you are eating every day, so that you do not consistently exceed this limit.

Why do we eat too much Sodium?

Food manufacturers know this and since they want to sell more food, they add more salt to their products. We know this so we add salt to our boiled egg in the morning, slather some salty mayo on our salad at lunchtime, then munch on salty pretzels in the evening.

The problem is that our bodies evolved to eat food without added salt.

Salt is not Sodium

Common salt is sodium chloride, which is about 40% sodium and 60% chloride by weight. Sodium is a metal and chloride is an anion of chlorine. From an everyday health perspective, it is not important to know the ins and outs of the chemistry, but it is important to realise that not all salt is sodium and not all sodium is in salt. There is sodium in many other food chemicals, such as sodium bicarbonate (baking powder/baking soda), and monosodium glutamate (MSG). To complicate matters further, there is sodium in just about everything else! For example, eggs contain 150mg of sodium per 100 grams whilst dried apricots have 37mg per 100g.

The label on packaged foods shows the value of sodium from all sources including salt: the manufacturer has had to convert it as required by law.

If you eat a modern balanced diet, you are probably never going to suffer from a deficiency of sodium even if you never add salt to anything you cook and eat. However, we all add salt to food and since it is the most easily controlled source of sodium in our diet, it is useful to know how much we are adding daily.

How to Convert Salt to Sodium

The best way to convert salt to sodium is to use our calcount Sodium Converter at the top of this post, but if you would prefer a brain workout you can do it yourself this way: salt weight divided by 2.542 equals sodium weight.

This formula works out because chlorine (the element which makes the anion chloride) has an atomic mass of 35.45, compared to sodium’s atomic mass of 22.99. Since sodium chloride (common table salt) is one sodium combined with one chloride, it has an atomic mass of 58.45 (22.99 plus 35.45). All you need to do is divide 58.45 by the mass of sodium to arrive at the proportion factor of 2.542.

Bear in mind that this formula works for pure, laboratory grade sodium chloride. The salt you buy from the supermarket is quite different because it likely contains impurities and different types of other salts mixed in with sodium chloride. Sea salt in particular is likely to include a wide mix of other natural salts and minerals.

Confused? Just use our converter!

Sodium is to be found in most foods, simply because it is a common metal found in the ground and the sea and both plants and animals use it for life processes. Leaving aside actual salt and baking powder, the highest sodium levels are to be found in dry stock food ingredients like cube beef stock, dried seasoning mixes like taco flavour powders, and dried soup pouches. Dried and preserved products tend to have concentrated levels of sodium, as do yeast spreads like Vegemite and Marmite. This is a list of 25 high-sodium foods, courtesy of FSANZ (values per 100g):

How much Salt should you Eat per Day?

Studies have shown that the average person today eats over 4000mg of sodium, just from everyday processed food bought from the supermarket (no extra salt added). Any sodium added to that load from a saltshaker is going to take that person’s daily intake to double or triple the recommended level.

The key takeaway from an understanding of how much sodium there is in food is this: do not add salt to your food at the table.