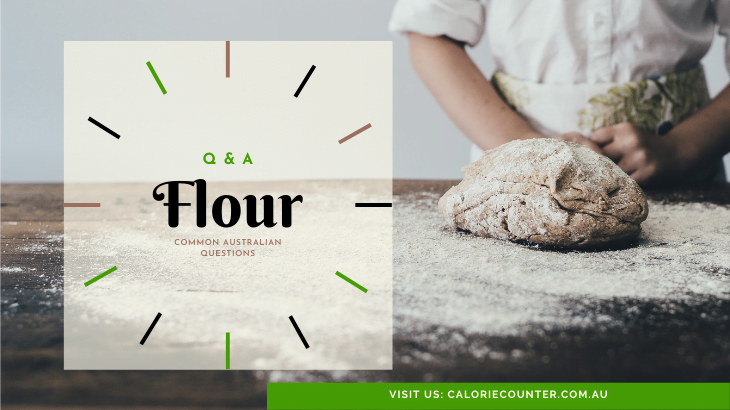 In Australia we often come across recipes, food labels, and informative articles about flour which make us go hmmmm? Flour is different around the world, so finding the right nutrition information can be a challenge. Let’s try to clear some confusion with a quick flour Q&A:

Q: What is Cornstarch?

A: Grind the starchy part of corn (maize) kernels to make cornstarch. In Australia, we usually call corn starch “cornflour”. Cornstarch and Cornflour are the same thing. Confusingly, “corn flour” sold in Australia used to be made from wheat, rather than corn. Today, however, popular corn-flour/corn-starch products are in fact made from corn, as you can see from this ingredient list. Corn starch often serves to thicken sauces, soups, gravies, and casseroles. Corn flour added to cakes lightens their texture (by reducing the protein level, see cake flour question below). Feel free to make a straight swap of cornflour for cornstarch, available from supermarkets like Woolworths and Coles!

Q: What is All Purpose Flour called in Australia?

A: Call All Purpose Flour “Plain Flour” in Australia and you will be talking about the same thing. It is the basic, go-to flour for use with most simple recipes which call for “all-purpose” or just plain “flour”. Some people call All Purpose, or Plain Flour, “AP Flour”. Plain flour is a blend of fine ground wheat endosperm. It can be used for just about any purpose flour is usually called for, including bread, cakes, cookies, thickening, and so on. The fact that it is a general, or all-purpose, flour means that it is not a great “specialist flour”, for example its coarser grind makes it less suitable than cornflour for thickening.

Q: What is Bakers Flour in Australia?

A: Bakers Flour is a hard flour, also known as Bread Flour, so called because it is good for making bread, pizza bases, and other chewy baked goods. Baker’s Flour is sometimes called High Protein Flour in Australia. Manufacturers blend wheat flour which has a high (11%-16%) protein content to make baker’s flour. The proteins (a.k.a. gluten) form a network of strands, especially when the baker’s flour dough is kneaded, to make the product stretchy and chewy. You can use baker’s or bread flour instead of plain flour, but not for cakes or anything less hefty than a slice of focaccia. Chewy cake is not cake. Plain flour can be substituted for baker’s flour, but the resultant food will be less flexible and durable.

Q: What is Self Raising Flour in Australia?

You cannot use self-raising flour to successfully make bread the traditional yeast-leavened way. If you add yeast to self raising flour, your bread is likely to flop into itself due to over-proofing.

Q: Is Cornmeal the same as Polenta?

A: Yes, cornmeal is the same as polenta, but it’s a bit complicated. Whilst polenta is simply whole corn kernels which have been ground into a coarse flour, in some parts of the world “polenta” is taken to be the product of cornmeal. Polenta is usually cooked by boiling one-part cornmeal with four parts water to make a porridge. The porridge can be eaten as-is or left to cool into a polenta loaf. Once cooled, the solid polenta can be cut into slices and fried or baked. Thus, polenta is corn meal to some people, yet to others polenta is what you make with cornmeal. In a pinch, you can substitute semolina for polenta, but your finished product will be stickier and smoother.

Q: Can you buy Cake Flour in Australia?

A: Yes, you can, cake flour is available from most major grocery shops. However, cake flour is not usually called so in this country (see the calorie link below for an example). The only difference between cake flour and plain flour is that cake flour has a lower protein value. Cake Flour is also known as Soft Flour in Australia, because it is made with a blend of low protein/gluten wheat which results in a less structured bake. Read the section on Baker’s Flour to understand how the protein in flour makes for a chewy bite. Most people prefer their cake to break easily in a delicate crumble, hence the use of low protein flour.

You can make your own cake flour by adding two tablespoons of cornflour to one cup of plain flour. The resultant mix has a wheat protein level comparable to that of commercially available cake flour and will make less dense cakes than pure plain flour.

Q: What can be used as a flour alternative?

A: Nothing can substitute flour because flour is the only flour there is. Any alternative to flour must be like flour, so it is flour. Make flour by milling any food to a dry powder. This includes grains like wheat and corn, nuts like almond, rhizomes like arrowroot, and seeds like amaranth and quinoa. Any flour can be used for baking, thickening, frying, boiling, and steaming, but of course the results will vary depending on the type of flour used. For best results, follow a good recipe, or just have fun experimenting. Anyone for coconut flour banana bread?