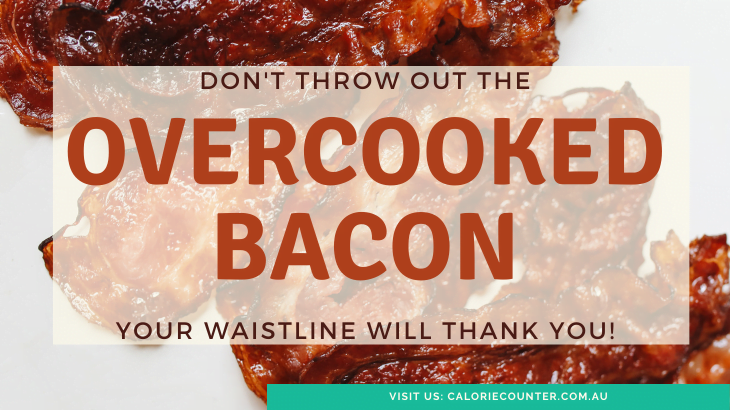 Overcooked bacon might not be appetising, but there’s an overwhelmingly good reason you should prefer it to perfectly done bacon. And don’t be put off by its appearance, there are ways to make it look and taste better.

There’s no way to sugar-coat it (although sugar-coated bacon is a thing): bacon is a staggeringly high-calorie food. One single 28 gram rasher of untrimmed raw middle bacon contains a heart-stopping 87 calories! That’s one reason why a burger with bacon packs way more calories than one without. In our view, anything you can do to reduce the calories in bacon (assuming you cannot resist eating it) is a good thing!

In the example of a single 28 gram (raw weight) rasher, the calorie count drops from 87 calories to 48 calories in an 11 gram cooked rasher. The cooked bacon has lost water and oil through the cooking process, making it more concentrated nutritionally, but with fewer calories overall thanks to the reduced fat content.

Overcooked bacon has even Fewer Calories!

The more you cook bacon, the more fat is rendered, until you are left with nothing but the bits that don’t melt. If you cook it really slowly, the bacon will not burn to an inedible crisp of carbon, even if by most accounts it will be overcooked. That is the one overwhelmingly good reason to prefer overcooked bacon to the normal version. Each gram of lost weight through cooking results in a calorie lessening at the rate of more than 2 per gram. There’s probably a loss curve with diminishing returns, but you get the point.

Just remember that the calories have not disappeared, they are simply in the pan grease. Make your cooked bacon even less calorific by blotting it with a paper towel before tucking in!

Overcooked bacon does not have to be tossed out. Unless it is properly burned to an acrid crunch, you will enjoy the extra crispiness and it is not in any way “bad” for you. There is some research which indicates that any sort of charred meat should be eaten sparingly, but the jury is still out. Best of all, you can crush it to make “bacon bits” which infuse anything with that distinctive bacon flavour and aroma.