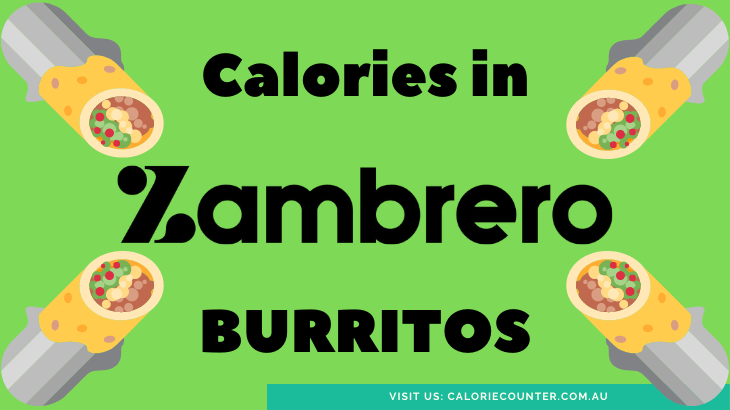 Zambrero is an inspiring Canberran company and the burritos are good and all, but what sort of calories are we in for when we order from the menu? Let’s take a look at their burrito favourites to get a sense of what these tortilla-wrapped Mexican-themed handfuls do for our daily calorie targets!

Zambrero was founded by Dr. Sam Prince in 2005, with the first restaurant opening in Canberra, his hometown. Today the chain offers the usual Mexican/Tex Mex fast foods we have come to expect from establishments riding the ongoing Mexican street food inspired wave. If you have tried their competitors like Guzman Y Gomez and Mad Mex you already know what to expect before you step up to the beaming latex gloved wrapping staff at the counter.

Calories in a Zambrero Burrito

Burritos are like Subway sandwiches, no two are exactly alike because they are made to order with eyeballed ingredients. Thus, even the burrito options with formulated fillings like the ones arranged on this list will have widely varying calorie counts. All it takes is an extra-heaped dollop of sour cream or a heavy-handed veggie portion to increase overall calories count by 10% or more. That said, this list will give you a good general guide to the calories in Zambrero burrito:

The lowest calorie burrito from Zambrero is the Cauliflower Power Burrito, with 572 calories per serve. Wait, so the lowest calorie regular-sized burrito at Zambrero has almost 600 calories? That is correct, because burritos are densely-packed bundles of high-calorie ingredients, even the ones based on cauliflower. Wait until you see the last burrito on this list!

Unsurprisingly, the Zambrero Pork Power Burrito, made with lean pork cuts, has a very similar calorie count to its chicken counterpart (674 calories per serve).

Classic Zambrero burritos include cheese, beans, sour cream, and corn amongst others, so it is no surprise to see them edging and surpassing the 700 calorie mark. Cauliflower Classic is the least calorific of the classic burritos, with 692 calories per serve.

In case you’re wondering, “Barbacoa” is where the word “barbecue” comes from. It is a method of cooking meat slowly over an open fire, traditionally in an enclosed sub-surface oven. The Taino people who introduced the method to the new American settlers were wiped out in the 16th century, so it is good to see parts of their culture surviving at Zambrero. The Zambrero Barbacoa Beef Power Burrito has 719 calories per serve.

Chicken Classic Burrito is good for a big 760 calories per wrap, so try not to order extras or sides!

The “IQ” in the IQ range of Zambrero products comes from the name of their salsa; “Salsa IQ”. Said salsa contains essential vitamins and minerals which are used for healthy brain function. Presumably, the IQ is an allusion to Intelligence Quotient tests? Anyhoo, the Chicken IQ Burrito has 774 calories in it.

We’re not sure whether or not eating a Zambrero Pork IQ Burrito will make you smarter, but it will add 775 calories to your daily intake!

Somehow, this Barbacoa Beef Triple T burrito manages to stay below the 1000 calorie level, with 968 calories per serve.

Vegetarian Triple T Burrito has the most calories of any burrito you can order from the menu at Zambrero. It is obviously a challenge to finish, but if you do manage to eat a whole one, you will be well past the half-way mark towards a daily 2000 calorie target!

The final word on Zambrero Calories

The type of burritos you get from fast-food chains like Zambrero are very high in calories, that’s the bad thing. The good thing is that they are incredibly nutritious, because you are getting a well-balanced meal with all the macros and most of the essential micronutrients you need with every bite. Eat a Zambrero burrito as your main meal of the day, without any sides or extras, if you want to stay within the recommended range or lose weight with a 1500 calorie diet.

Want to see calories, kilojoules, protein, carbs, fat, and other nutrition facts for Zambrero? You can delve further into the Zambrero menu by finding specific items with the calcount Food Search Box: