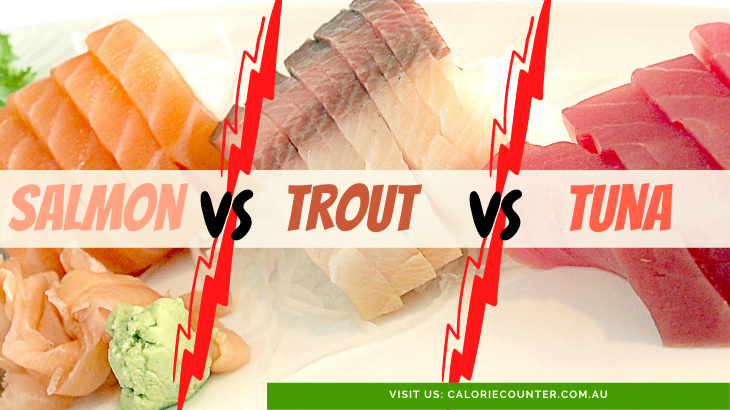 Trout VS Salmon VS Tuna means calories and nutrition in trout, compared to salmon, compared to tuna, let’s go! You might have read our post on the best 3 fish you can eat and thought: “How does salmon compare to trout and tuna?”. It is a natural question, considering that salmon and trout are sometimes mistaken for one another, and tuna shares a lot of the characteristics of both. Well, read on to see how these three popular fish stack up nutritionally.

Calories in Trout, Salmon, and Tuna

The calorie differences between these three species proves that fish are not food equivalent to one another. Salmon has 209 calories per 100 grams, whilst Trout has 154, and Tuna 103. Putting those numbers into perspective, you can eat more than twice as much tuna as salmon for the same calories! Trout has about 35% fewer calories than salmon, and about 50% more calories than tuna.  The big takeaway here is that if you are strictly counting your calories and choosing between equal weights of tuna and salmon, take the tuna.

Fish is an excellent source of protein, but which fish out of tuna, salmon, and trout has more? It turns out that they are much of a muchness in this case. Tuna leads with 23g protein per 100g, followed by salmon with 21g/100g, and trout with 20g/100g. The protein difference on a weight-for-weight basis between tuna and trout is just 15%, in tuna’s favour. If you are targeting protein and need to make a fish choice for dinner, just follow your tastebuds.

The fat from fish is high in omega-3 fatty acids, which fight inflammation and may help heart health. Here, there is a stark difference between trout, tuna, and salmon. Salmon, at 14g per 100g, leads in fat content. Trout follows with 42% less fat (8g/100g), whilst tuna lags with a skinny 1g of fat per 100g of edible weight. Tuna is much leaner than salmon and trout. You would have to eat 14 times more tuna than salmon to get the same amount of fat!

Is Trout healthier than Salmon?

In a word, no. Trout is not healthier than salmon because it typically contains less of the valuable omega-3 fatty acids found in the fat of both salmon and trout. Bear in mind that the words “salmon” and “trout” are not scientific classifications. What we call Rainbow Trout and Pink Salmon are actually in the same genus (family) called Oncorhynchus. Brown Trout and Atlantic Salmon, on the other hand, are both in the genus called Salmo. As with so many other fish, the names get confused and swapped around depending on time and location. For example, in China all trout are called salmon.

Tuna VS Salmon VS Trout Mercury

Tuna, salmon, and trout all accumulate heavy metals like mercury from the food they eat. Being near the top of their food chains, they are the second last stop for mercury as it passes from plankton to predator from its starting point in volcanoes and geothermal vents. Mercury concentration is measured in PPM (Parts-Per-Million). Tuna, with 0.391PPM, contains far more mercury than either salmon or trout. Trout has 0.071PPM, whilst salmon has 0.014PPM. Whilst it is generally accepted that the benefits of eating fish outweighs the risk of mercury poisoning, studies like this one show that there is no healthy level of mercury for humans. Given a choice between these three fish, choose salmon to reduce your mercury intake.

When it comes to taste, in our opinion, salmon wins hands down. It is a versatile fish which can be prepared successfully in so many ways, from pan-searing, to baking, to grilling and even steaming. The problem with tuna is that it can dry out quickly when cooking, due to the low-fat content. Tuna tastes “cleaner” than salmon and trout, but it can be chewy when overcooked (it is easily overcooked). Trout, on the other hand, can have an inconsistent texture and flavour, depending on its growth environment. Maybe we have just had one too many muddy-tasting trout to be convinced that it can hold a candle to salmon.

That said, choice cuts from all three fish make excellent sashimi and sushi. They’re also not bad in canned form. Use our Food Search Box to compare brands!