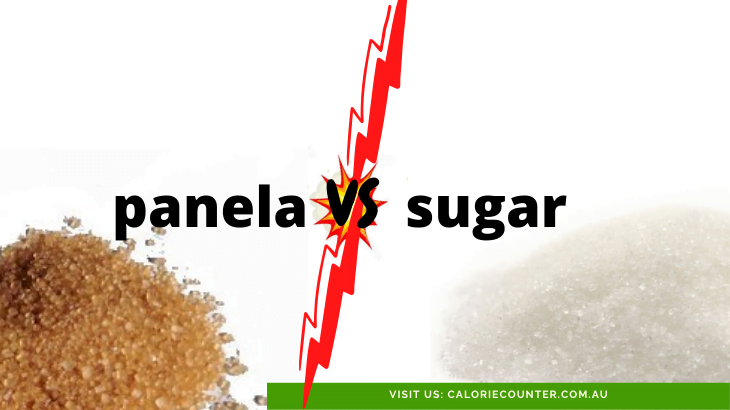 It is a flavoursome choice for sweetening anything but is panela healthier than sugar? The answer is yes, but not by much. The difference between sugar and panela is literally skin deep. You will not get any detectable nutritional benefit from eating one rather than the other.

Contents Show
1 Panela is not Centrifugal Sugar
2 Panela is sugar
3 Difference between White Sugar and Brown Sugar
3.1 A Thin Coat of Mollases
4 So, is Panela Healthier than Sugar or Not?
5 Taste Difference: Panela VS Sugar
5.1 Beware misleading marketing
5.2 Related:

To understand why, first we must think about what sugar is. Sugar is a group of sweet compounds found in plants like sugar cane, sugar beet, corn, and sugar maple. Examples are sucrose, fructose, and glucose. In pure form, these chemicals form colourless or white crystals when not dissolved in water.

Panela is not Centrifugal Sugar

In the “olden” days (before the mid-19th century), almost all sugar sold was brown or black because it was not pure. Back then, when people said “sugar”, they meant brown sugar.

The brown/black colour comes from all the non-sugar parts of the plant. These “impurities” combine with the sugar to form a sticky, thick syrup called molasses. Molasses adds an earthy/burnt/bitter taste to whatever its added to.

Nowadays, we have the technology to separate the sugar from the molasses effectively and efficiently, using a centrifuge. Most of the sugar sold today is refined centrifugal sugar, produced at vast industrial scale.

A centrifuge is a machine which spins a batch of pre-processed sugar-molasses solution. It spins fast enough so that pure sugar crystals are separated from the molasses. The sugar crystals are collected and further refined to produce common white sugar. At this stage it is a singular product which is sold as 99.5% pure sugar.

This high purity is a big reason for sugar’s bad reputation. It is so pure that, besides calories, there is practically no other nutritional value. Pure calorie foods are known as “empty calorie foods” because they don’t contain vitamins and minerals. Less-pure brown sugar has more nutritional value because it includes molasses along with the sugar.

The word “panela” is simply the name given to the type of sugar made in some parts of South America. In other parts of South America, this same sugar is called rapadura, chancaca, atado dulce, or piloncillo. Panela has been made in the region for about 500 years. Even today, it continues to be made the same way.

Imported from South America, panela is cane sugar (sucrose), same white and brown sugar made in Australia. The key difference between panela and regular sugar (besides the price) comes from the way it is made. Unlike centrifugal sugar, panela is made the pre-19th century way, by simply evaporating the water.

Non-centrifugal sugars from other parts of the world include jaggery and gur (Asia), papelon (Caribbean), tang (China), and many others. They are basically all the same thing.

So, the difference between white sugar and brown sugar is that brown sugar has more molasses in it. Does that mean that panela is simply normal brown sugar?

If so, why would anyone fork out extra money to buy it instead of Aussie brown sugar?

A Thin Coat of Mollases

The answer to that question lies in a not-so-secret secret of the sugar industry: brown sugar is normal white sugar. Well, except that it has some molasses splashed onto it. First, the sugar companies make white sugar. Then they spray molasses onto it if they want to make brown sugar.

Light brown sugar has a thinner coating of molasses on it than dark brown sugar. It is mush cheaper and easier to coat white sugar than make separate batches of proper less-refined sugar.

Crack a typical brown sugar crystal in half and look closely, you will see that it is white inside!

Unlike typical brown sugar, panela is brown all the way through. It therefore contains a higher proportion of molasses and tastes much more unrefined. Panela is a less-pure sugar than normal brown sugar because it is made the old-fashioned way, without a centrifuge.

So, is Panela Healthier than Sugar or Not?

Panela and other non-centrifugal sugars naturally contain molasses as well as sugar. This makes them healthier because molasses contain trace minerals and vitamins whereas sugar is just that: sugar.

Pure molasses itself is high in vitamin B6, magnesium, manganese, and other minerals.

However, from a practical standpoint, there is almost zero nutritional benefit to opting for panela instead of normal white sugar. This is because the actual quantity of molasses in panela is tiny.

The actual molasses content of panela is usually just 5% by volume. Nutritionally, this is an insignificant percentage considering that sugar is not a product that is consumed by the bowlful.

The amount of extra minerals and vitamins in a teaspoon of panela compared to regular sugar is undetectably small. If you are eating panela to get the nutritional benefit of molasses, you’re doing it wrong. Just buy a jar of molasses instead.

There is no meaningful difference in the calorie count of panela and regular sugar.

Most types of sugar pack about 385-395 calories per 100 grams, (about 18 calories for a teaspoon). This is true for both centrifugal and non-centrifugal types.

When it comes right down to it, the only reason to use panela instead of other sugar is taste. Panela tastes much more interesting than regular sugar because it is thoroughly imbued with molasses.

That means, molasses taste different depending on the cane. The flavour also depends on how long they were boiled for, and the temperature they cooled at. Also, what water, if any, was used in the process of evaporating the sugar syrup to make the panela.

On the other hand, all white cane sugar tastes the same because it is 99+% pure.

Something about the South American cane and their age-old process makes panela tasty. It is so tasty that in South America, people call home-made lemonade “panela water” (aguapanela). If you have tried some you’ll know that the panela flavour dominates the lemon juice.

The key takeaway is: panela tastes better than regular white or brown sugar if you like the taste of molasses. However, practically speaking it is just as lacking in nutrients. Panela is technically healthier than sugar, but equally nutritious in the everyday context.