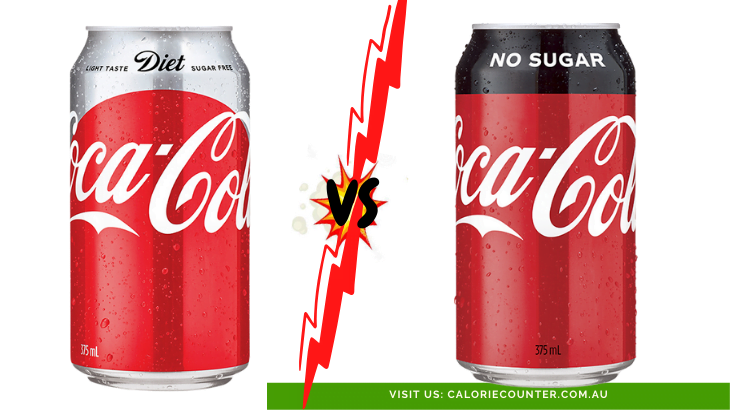 Coke No Sugar and Diet Coke are sugar-free and contain less than one calorie, so are they really different? Let’s take a closer look at both drinks to find out if so and which one is healthier.

Contents Show
1 Different Histories
2 Coke No Sugar Ingredients compared
3 Coke No Sugar Calories
3.1 Diet Coke Marketing
4 Which is Healthier, Diet Coke or Coke No Sugar?
4.1 Aspartame may be Bad for You
4.2 Carbonated Water might cause hunger
4.3 Food Acid might weaken bones and teeth
5 Diet Coke compared to Coke No Sugar

Diet Coke replaced the Coca-Cola company’s first-generation diet cola, named Tab. Coke No Sugar replaced Coke Zero in Australia and became Coke Zero Sugar in some other countries (not to be confused with Coke Zero).

Diet Coca-Cola was launched hesitantly due to fears that customers would reject anything other than “the real thing” being called Coke. Up until 1982, there had not been another “Coca-Cola” besides the original since 1886. Diet Coke does not taste like regular Coke, but it became massively popular because people began taking calorie control seriously.

Diet Coke’s success led them to launch many other Cokes, like Cherry Coke, Coke Ginger and Coca-Cola With Energy. In 2005, they began to sell Coca-Cola Zero to appeal to people who wanted the regular Coke taste with the Diet Coke calories. They ran into a problem though: many people did not realise that Coke Zero was sugar-free, just like Diet Coke. In response, the company tweaked the recipe again and renamed the product to either Coke No Sugar or Coke Zero Sugar, depending on which market it is sold in.

The ingredients in both drinks are remarkably similar. This may come as a surprise to people who have tried both, because the two colas taste quite different. The key flavour differences are a company secret, but we can take a side-by-side look at the published ingredients:

The three major ingredient differences are that Diet Coke, compared to Coke No Sugar (or Coke Zero Sugar), has 1) more “Coke Secret Flavour” by volume, 2) a preservative (sodium benzoate), and 3) has citric acid instead of sodium citrate.

Diet Coke has about 13mg of caffeine per 100ml, compared to about 10mg in Coke No Sugar.

When it comes to calories, Coke No Sugar has a slight edge over Diet Coke: 0.33 calories per 100ml compared to 0.35 calories per 100ml. Most of the calories in both drinks probably come from the food acids. Bear in mind that at the level of less than one calorie per 100ml, both drinks may realistically be called zero calorie because the human body is going to draw no usable calories at that dilution.

If Diet Coke has more secret Coca-Cola flavour in it than Coca-Cola Zero Sugar, why does it taste less like classic Coca-Cola? Probably because there are different Coke flavour recipes, and Coke No Sugar’s version hits the mark closer than Diet Coke’s.

In Australia, both Coke No Sugar and Diet Coke are sweetened with Aspartame and Acesulfame Potassium. This sweetener blend is different in other countries.

The flavour of Coke No Sugar is clearly different from Diet Coke by design. Coke No Sugar was introduced to appeal to the people who wanted a sugar-free Coke but did not want to drink Diet Coke.

The three main reasons for not wanting to drink Diet Coke are that:

2) it has the word “diet” in it, therefore carries a certain social stigma, and

3) it is packaged in light colours and advertised as being “Coke-lite”, lending a certain airiness to the brand.

To overcome these reasons, Coke No Sugar

1) is remarkably close to the original Coke flavour,

3) is packaged in dark colours and advertised as being “proper Coke”, lending a certain heaviness/solidity to the brand.

Which is Healthier, Diet Coke or Coke No Sugar?

Before answering the question, which is healthier, Diet Coke or Coke Zero Sugar, let us first and foremost acknowledge that neither are healthy! A quick rundown of the reasons why:

Aspartame may be Bad for You

Aspartame is one of the most intensely studied food chemicals in the world. It is a man-made chemical, first coming out of the lab in 1965. It then took over 15 years to gain regulatory approval by the FDA, mainly because many scientists just could not believe that it couldn’t have some sort of harmful effect! One of the biggest concerns was that the molecule in some ways looks like other molecules which cause brain tumours.

If you read the nutrition label of foods which contain aspartame, they will often include the warning “Contains Phenylalanine”. Phenylalanine is a by-product of aspartame and should be avoided by people with Phenylketonuria (PKU), especially pregnant women.

The other sweetener in both drinks, acesulfame potassium, is also 200 times sweeter than sugar and is also the subject of academic debate as to whether it causes cancer.

That said, many studies have shown that aspartame is harmless, even though many scientists today are still studying it closely. The jury is still out!

A study in 2017 showed that the carbon dioxide in carbonated water stimulates the release of ghrelin, the so-called “hunger hormone”. If true, this means that fizzy drinks make you want to eat more than you should.

Phosphoric acid, citric acid and sodium citrate have all been implicated in harmful effects on human teeth and bones. Older women who are at risk of osteoporosis should really avoid eating/drinking too many food acids.

Finally, it tastes better too!